Like a Swarm for books? Even if you haven’t started, or didn’t finish. Just snap a pic! 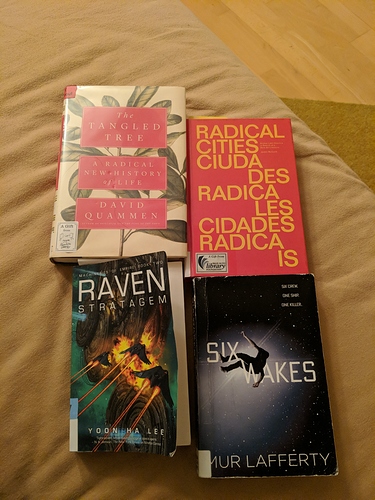 The Tangled Tree - David Quammen - ended up being more of a brief science history than exploring the implications of horizontal gene transfer and the general idea that the Tree of Life is a misnomer. Need to finish skimming - maybe it’ll talk less about what Carl Woese did and more about why I should care at the end.

Radical Cities - Justin McGuirk - a slog depending on the chapter, but some chapters have really interesting stories. I loved the Bogota chapter and how they used mimes to do traffic control.

Raven Stratagem - Yoon Ha Lee - just snapped this up after giving up on the first of the trilogy. This is the 2nd book and I’m getting a little deeper. But it’s still really tough reading with a lot of concepts u have to look up or is never explained. Sci fi war army worldbuilding

Six Wakes - Mur Lafferty - space thriller. 6 clones wake up and find their former clones (they’ve been in space for hundreds of clone cycles) have been murdered. Easy read I’ve been enjoying 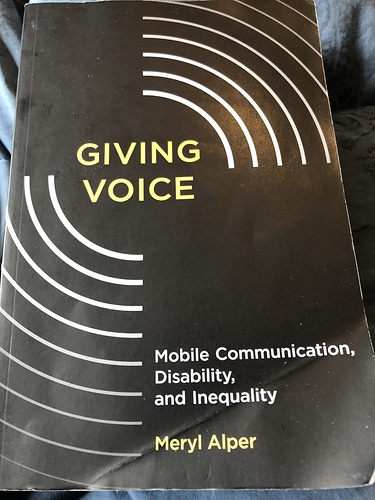 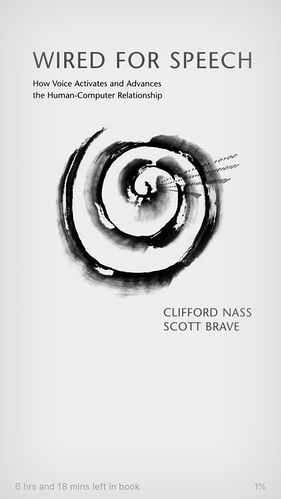 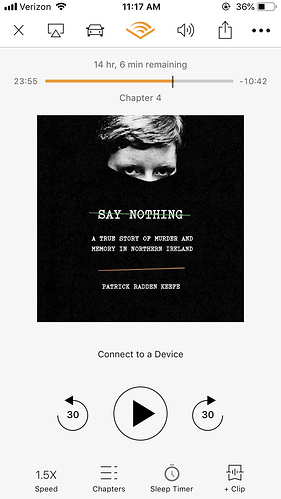 Giving Voice - Meryl Alper - physical book - A really thoughtful discussion of how people with disabilities use synthetic speech hardware and software, based on Alper’s ethnographic research with families from different socioeconomic backgrounds. The most woke take I’ve seen on this tech. I learn or reframe something almost every page

Wired for Speech - Clifford Nass & Scott Brave - Kindle - Fascinating research from a Stanford communications group that describes “Computer as Social Actors” theory as it applies to synthetic speech, ie where do we extend our biases about human speech to computerized speech, and what parameters, like gender, pitch range and contours, can change behavior. Fascinating. Addresses a lot of questions that people get very hand-wavey about when talking about voice assistants

Say Nothing - Patrick Radden Keefe - Audible - Just started this based on a recommendation. I’ve spent a lot of time in Belfast and Northern Ireland with my stepmom’s family, so know some basics about the Northern Irish troubles, but was excited to “read” this and contextualize those basics through stories. Really captivating and vivid so far, going into multiple narratives. Read by the Northern Irish author, which adds a layer of meaning to it, otherwise I think it would be unlistenable

Great topic, thanks for posting! Really like this format with both photos + descriptions

Maybe we can have a thread like this ~ once a month or so. Seeing others’ current / “on deck” reads could be a good way to get little ad hoc book clubs going too.

All mine below are nonfiction…lately been reading more fiction on my Kindle and have some sci-fi ones I’ll prob read soon. Greg Egan and N. K. Jemisin are both high on my list at the moment.

Also, didn’t take photos but ones I just finished / am about to finish:

Not sure which of these I’ll read next but the top row = ones I just picked up on my last trip to the bookstore, the others I’ve had for a while but high on my excitement list. If any stand out let me know and maybe we can read something together! 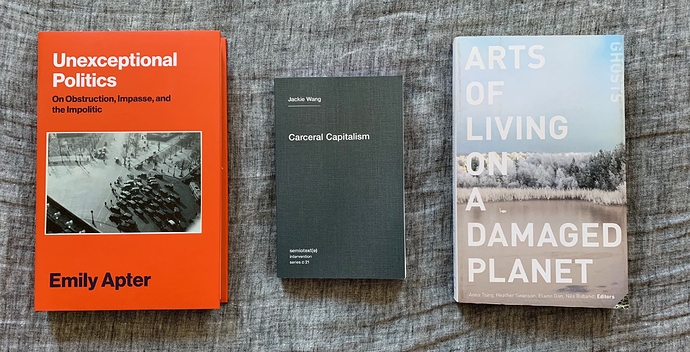 Great topic, thanks for sharing! 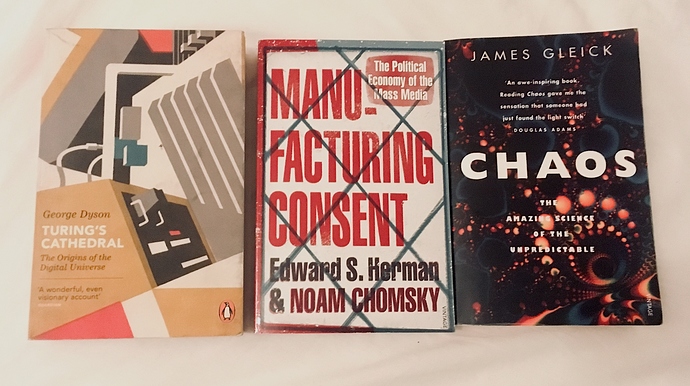 Reminds me of another book I keep in my Antilibrary

“Discipline and Punish: The Birth of the Prison” by Michel Foucault, which researches the origin of the penal system.

Nice, these all look great! I think I may have a copy of “Chaos” somewhere. I really enjoyed his book “The Information: A History, a Theory, a Flood” too. Along similar lines, I would definitely also recommend Complexity: A Guided Tour by Melanie Mitchell. Felt sufficiently thorough yet approachable for a beginner, like I guess all good pop sci / tech / etc

I am reading these two: 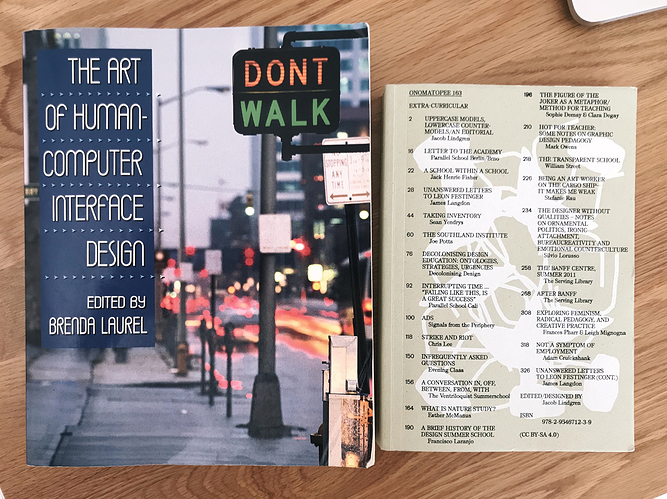 Nice! I have a copy of this one by Brenda Laurel (still in my antilibrary), also looks great: 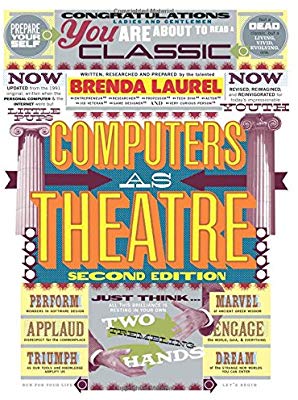 Extra-Curricular has been on my list for a while, glad you’re enjoying it! Seems right up my alley. I just may have to go pick up a copy now 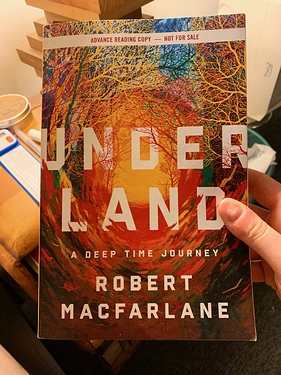 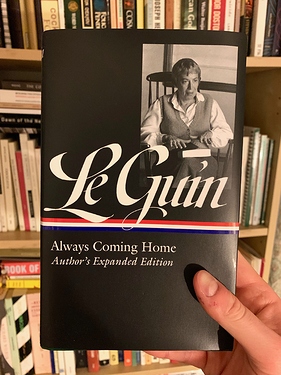 Left = currently reading: Underland by Robert Macfarlane
Almost done & really enjoying this one! An intersection of nature writing, history, travelogue, reflections on things like mortality and art and time. The author explores all sorts of underworld realms, from natural cave systems to mammoth mines to the Paris catacombs; why they exist and what they mean in human context. Now I want to read some of his other books: The Wild Places, The Old Ways, Landmarks

Right = next up: Always Coming Home by Ursula K. Le Guin
Looking forward to starting this one in the next week or so! See this topic for a bit more about the book and why I think it looks so cool. I know a few others here are interested and/or already reading it too